Sinking Ships: How Failing (and Nearly Failing) Providers Have Helped to Spur Our Recent Growth

Sinking Ships: How Failing (and Nearly Failing) Providers Have Helped to Spur Our Recent Growth

The niche of digital signage has seen a number of casualties in the last few months, none of which bodes well for the industry at large, but which is expected for an industry bred out of technology. Low barriers to entry, ease of scalability and free software solutions make it difficult to compete in an environment of constant change. Such constant change has recently brought several competing digital signage firms to the bargaining table–negotiating reorganizations, recapitalizations and new loans to help sustain the business. Luckily for us, this has created some very interesting growth by what I might call “attrition from the competition.” 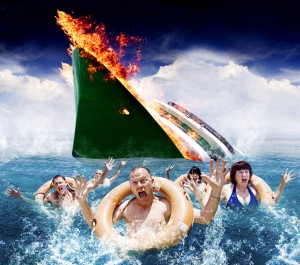 In a market that is full of SaaS-driven companies recaps, loans and reorgs don’t look so good. Rocking the boat in an organization tends to toss people out, including customers. Like a good housewife, customers want a vendor that has real staying power–especially if they’re invested in a solution for the long-haul. Recent public announcements from some of the larger players in digital signage have not boded well for some of the more well-known brands in the industry. Reorgs like this signal at least one of several things:

In each case of our competitors, I suspect there is some combination of the above. The latter of the five is what concerns me personally the most, but since it’s the one area I can’t control I try not to worry too much. Fortunately, when we’re negatively impacted by something external, the knife doesn’t cut both ways. We’re not beholden to public shareholders, venture capitalists or private equity groups. We have the added benefit of keeping our own dirty laundry to ourselves. If we did have a major issue or shift in the company, we wouldn’t be required by law to send out a press release and make it known. We’re fortunate in that way. Others–not so much. They not only have bad news internally, but eventually the knife cuts the other direction. The stock is typically negatively impacted. Worse still is the negative impact on the customers, which is what we’re currently witnessing right now.

Down, But Not Out

Sure, our competitors are “down, but not out,” but the news stories have been negative enough that we’ve seen a lot of stirring within the market, enough so that we’ve a number of new clients who’re seeing the proverbial forest through the trees. Their numbers are not minuscule and they’re not coming from just one single competitor. They’re from several. Certainly the competition is down, but not out, but losing customers is terrible if you wish to appease shareholders with stories of growth. Moreover, a truly positive outlook for customers is also helpful in maintaining market share.

And while the companies themselves are down, but not out, the impact of the changing tides could prove even more fatal down the road. How long do you keep a growing, but unprofitable company afloat, especially as the growth slows?

When it comes to looking for passengers for our vessel, we’re not too concerned with where they come from, but as long as they come. If we can pick up a few floating customers from the sinking Titantics in the industry, then we’ll take them. But, it doesn’t mean we’re completely happy with where things are going. If the pie were bigger and the growth were stronger than more companies wouldn’t be seeing the issues we’re seeing. That’s the downside of picking up customers when they leave the competition: the industry itself becomes a bit more tainted. Customers ask, “who really can I trust here?”

We’re currently working hard to make accommodations for new users in the process of transitioning them to our system. We ourselves are also constantly and feverishly working to ensure we remain relevant in a increasingly competitive and shifting environment. Opportunity still exists for organic growth, but churn may have arrived–for some more than others.

We don’t revel in others’ failure, but what we’re realizing is that cost, quality, support and speed certainly all play a key role, but company staying power is still part of the decision to go get married to a particular vendor. We’re seeing that very clearly in some of our newest clients. What will the future hold for digital signage companies who have a hole in their revenue bucket and creditors sucking liquidity out the top? We sure hope we’ll never have any reason to throw the customer droves overboard. The verdict is likely still out on us all.