The idea of digital signs in restrooms is nothing new. It’s been used above urinals and behind functional two-way mirrors, but when does signage in the restroom get out of hand? I had a discussion with a potential client last week that wanted to place signage in potentially one of two areas within the bathrooms of a commercial office building. The first was within the stall and behind the door so you would be directly facing the screens while occupied. The second was on the floor in the stall. These displays wouldn’t be above the urinal or at the mirror, but would sit directly within sight of the patrons doing their “business.” 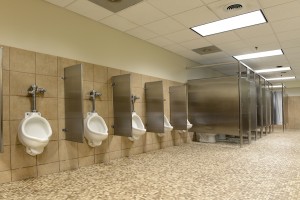 At first, I laughed. Then, I started feeling a little nervous. Yes, we know that most people admit to using their smartphones in the restroom, but putting signage in a place as private as the stall itself starts to move over into the creepy arena. Here are some reasons why.

There are a number of things to thoughtfully consider. First, what is your audience? If it’s not a sports arena, there will be other considerations to take into account. Are you going to be installing the signage in women’s restrooms, men’s restrooms or both? If so, what types of differentiated content will you be displaying. Will there be audio? If so, how would such an install be done tastefully without being overly obnoxious?

My last question had to do with security: how will such signs be secured? In general, restrooms are not the most secure locations partly due to the inability of placing security cameras in them. Unless you’re installing signage at a high-end country club restroom, security should be top of mind when placing the signs. Theft and vandalism would pose a real threat to the immediate ROI of any network install.

There are many arguments in behalf of this type of installation, including “you’ve got an extremely captive audience” and “you can use smaller displays for a less expensive deployment.” Sure, but the reasons against seem to heavily outweigh the reasons for. If a democratic decision were made for this type of install, it’s clear to see I’m on the opposing side. It’s just too weird, disgusting and freaky for me. In my mind, it has the equivalent reputability of rubber dog dung. There are times and instances where the location may prove an appropriate venue for this type of targeting, but it would take a real closer to move me away from the visceral reaction this type of installation gives me.

What do you think?