Since our product is free, our media players still make up a good portion of our revenue, but the trend where hardware is the strategy may have already crested. We’re starting to prepare for a day when the digital signage media players we promote and sell will be all but obsolete, replaced by something off-the-shelf, cheaper, all-in-one and readily available. 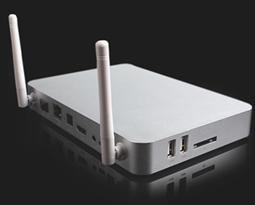 All-in-one digital signage displays are certainly nothing new. In fact, their proliferation is become more ubiquitous. Here are a few recent insights and trends and how we’re looking forward to the future of digital signage hardware.

First, let’s take a look at what the industry giants are doing to disrupt traditional consumer-driven television hardware and software:

Google TV–Google’s recent announcement regarding the company’s deeper move into the television market, makes the probability greater that the platform will be what matters. And, it’s appearing that –lucky for us–the platform of choice will be Android. When consumer televisions start to be shipped with benign computers or–better yet–embedded computers complete with Android, you can bet commercial displays will follow-suit, creating a shrinkage in demand for traditional external players.
Samsung “D” SmartTV–Samsung’s all-in-one smart television is the next consumer wave. See my point above for why it matters.
Apple TV–Apple isn’t novus in the ability to manufacturer displays. In fact, some of the company’s displays are of the highest possible grade. With that in mind, it’s not too far-fetched to envision a day when Apple does away with its small Roku-like device and begins shipping devices that literally are Apple TVs–complete with the TV itself.

Even if you ignore the smart TV phenom, there is the issue of hardware acceleration and software efficiency. As hardware becomes better and the software that runs on it becomes more efficient, that means the size, cost and footprint of players will continue to fall dramatically. This will mean high-impact digital signage will be capably done with much less cost, size and resources than ever before. The player certainly won’t be out of the picture completely, but its role in the whole digital signage ecosystem will decrease dramatically–perhaps into virtual oblivion.

There is yet another arena that will eat further into the media player space: tablets. More and more small form-factor displays will be replaced by remotely-controlled tablet versions of LCD digital signage. This will occur for a number of reasons. First, tablets are pound-for-pound (or square inch for square inch in our case) better at creating an impact. That is, they can create an impact on a better shoestring budget than a large LCD with massive power consumption. Have you visited a newer local bank lately. Traditional signage has been replaced by tablets. If you want to see where your digital signage player is going, look no further than you iPad.

What will this do to the providers of software? I can see several things occurring:

Sure, there are already a great many “all-in-one” display devices on the market today, but they’re becoming more and more prolific. As this occurs, the relevance of the digital signage player will continue to fade into the distance. My question for other digital signage vendors (who until the not-too-distant past were charging upwards of $3,000 for a simple player): what will you do when the digital signage media player fades away.