With the likes of Square gaining massive traction in the retail arena, it’s not just the providers of kiosks that are taking a major hit. Retail POS providers are seeing massive ebbing of revenues from traditional point of sale systems thanks to leapfrogs in technology. I expect further dissolution will occur when NFC and other Credit Card-annihilating technologies eventually hit the mainstream. Sometimes it’s difficult to see, but it’s certainly a necessary component of the “creative destruction” life cycle. 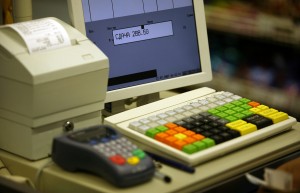 As legacy POS providers see their revenue slip-away, other sources of revenue –whose technology is not too distant from their core competency–may help to provide a supplement or uplift to the falling revenues. We’ve seen this begin to occur internally already.

When it comes to requests for Enterprise Reseller accounts, we’re seeing a greater interest coming from traditional point-of-sale providers many of whom are looking for ways to find incremental addition to current revenue. In my personal opinion, it’s a bit too little a bit too late. Digital signage is a big part of the innovation curve itself and has hit rock-bottom pricing much more rapidly than the entrenched POS market. Moreover, making money in this business is more difficult than it appears on the surface–something many software resellers don’t realize until they’ve made significant up-front investments in the product.

Retail marketing is in a constant state of flux. We’ve seen how automation, including digital signage have played a key role in increasing efficiency, but it does have its consequences. Using digital out-of-home to help propel your business out a cannibalization period in a completely different industry is probably not going to be the best solution for most providers.

There is one instance that would work VERY well for a quick revival: existing customer accounts. Digital signage is an easy upsell. If a legacy POS company had an existing client base to tap for installing an upgrade, including digital signage, it may help to revive the business, but my guess is that the margins would never be as great with a digital sign as they could be with a traditional POS pricing model. That’s just a guess

Traditional high-touch, high-margin businesses are continually being eaten-alive by technology advances with high-scale, lower margin business models. With the higher scale comes a bit more need to effectively manage support and personnel, but getting to scale rapidly means a good payout in a quicker fashion for investors.

Where do you see this market going? Will digital signage provide a boost in the arm?