Google has been on a acquisition rage lately, nabbing up everything from home automation technologies to running robots. How they relate, I’m yet uncertain. The company still remains very focused on its core products and revenue streams, including online text-based advertising. The latest product release should prove a real serious threat to the likes of Cisco et al. The features seem enticing, and the price point ($999) is reasonable for the functionality. The Signage box is much less expensive at $179. 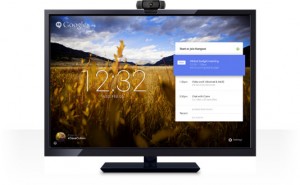 My personal worry is that Google Chromebox also may prove a threat to the digital signage market for the following reasons:

While there are downsides to others in the industry to a potential entrance by Google, either organically or by acquisition, there are also some potential benefits. Nothing provides more legitimacy than another publicly-traded, multi-billion dollar behemoth getting into the market. It could help boost demand for general DS products. Currently none of the other elephants in the room (Intel is the real beast) have real experience running an ad-based biz model–another boon for Google. Second, having Google in the market could help to flesh out the ad-based model further–something which still has yet to materialize. The likes of NEC’s VUKUNET and more recently BroadSign only have really scratched the surface of such a network’s true potential.

Just as a side note, I’m currently crafting this post on my Google Acer Chromebook. I love the thing, especially the cost ($200). When Google finally decides to make a few tweaks to Google Docs, Microsoft may have a very major issue on their hands. And if they ever decide to partner with Acer on some media players or a Chromecast-like signage stick, I’m sure the price point could be at or below what we’re already charge.

I know starting rumors is a bit childish, but it’s fodder for meaningful discussion. Do you think Google should enter the digital signage market? If so, what would it mean?

Also, Dave Haynes has already published a better review than mine on this.